What are the instances indicating the removal of wisdom teeth? 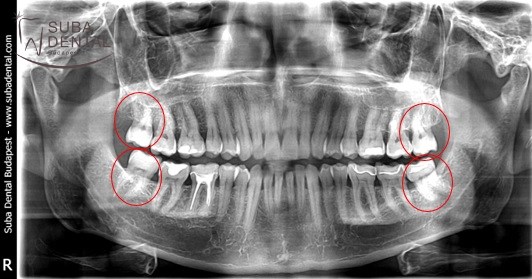 What are the instances indicating the removal of wisdom teeth?

What actually is a wisdom tooth?

Wisdom teeth are third molars. At the dawn of civilisation, when food required extensive chewing we fell back on our wisdom teeth to a greater extent. In our days of soft-cooked or fried food, however, we do not use our teeth to such an extent, and in the wake of several millennia of evolution these teeth often even fail to develop, and, more often than not, even their germ is absent. If the germs are present, they may occasionally develop into full-fledged teeth, but may also remain stunted. For the less fortunate, a full-blown wisdom tooth may give rise to annoying complaints. The eruption of wisdom teeth is usually expected between 18 and 25 years of age.

Our male patient with 4 wisdom teeth

But why is it worth pondering the removal of wisdom teeth in the first place?

Even a partially erupted wisdom tooth is at an increased risk for caries. Wisdom teeth sit in the rear region of the oral cavity and as such their cleaning requires reasonable thoroughness, and they may all the same develop problems. If a wisdom tooth leans against the neighbouring molar, that creates a perfect breeding ground for caries, destroying otherwise healthy teeth (caries forms). If caries gets the better of the molar, it may take protracted efforts (e.g. root canal treatment, crowns) to overcome the problem and salvage the infected tooth. Such interventions are cost and time-intensive and would not be necessary but for the wisdom tooth. 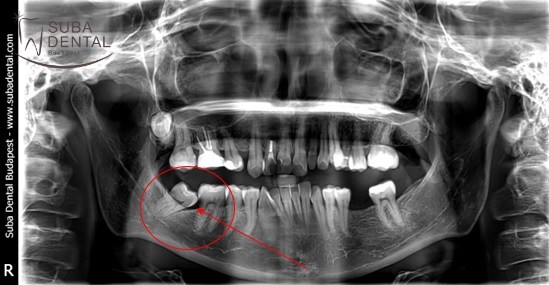 At the request of our female patient aged 37, her lower right wisdom tooth was not removed. Subsequently, the neighbouring molar had to be root canal treated due to the great extent of tooth decay having formed in it

Inflammation around the crown of the wisdom tooth (pericoronitis)

Inflammation around the tooth’s crown is the result of partial eruption. If the wisdom tooth erupts at a certain point in the gum, a pocket forms between the tooth and the gums. The pocket having formed is very difficult to clean, with bacteria easily making its way beneath the gums and giving rise to painful inflammation, known as pericoronitis. Initially, pericoronitis is only associated with minor pain which may amplify in time and radiate to the mastoid area. In such instances the gums above the tooth are inflamed and hyperaemic and may even excrete pus. In an advanced state, difficulties opening the mouth, or lockjaw (aka trismus) and the swelling of the surrounding lymph nodes may present. Alongside pain, fever may also present itself. With such complaints the patient must see the dentist without delay, since the inflammation may propagate to the apical area along the periodontal ligament, likely to result in further grave inflammatory issues.

A cyst may form around a partially erupted wisdom tooth, which progressively increases causing bone resorption in the jaw bones. The presence of a cyst is readily discernible in a panoramic radiograph. 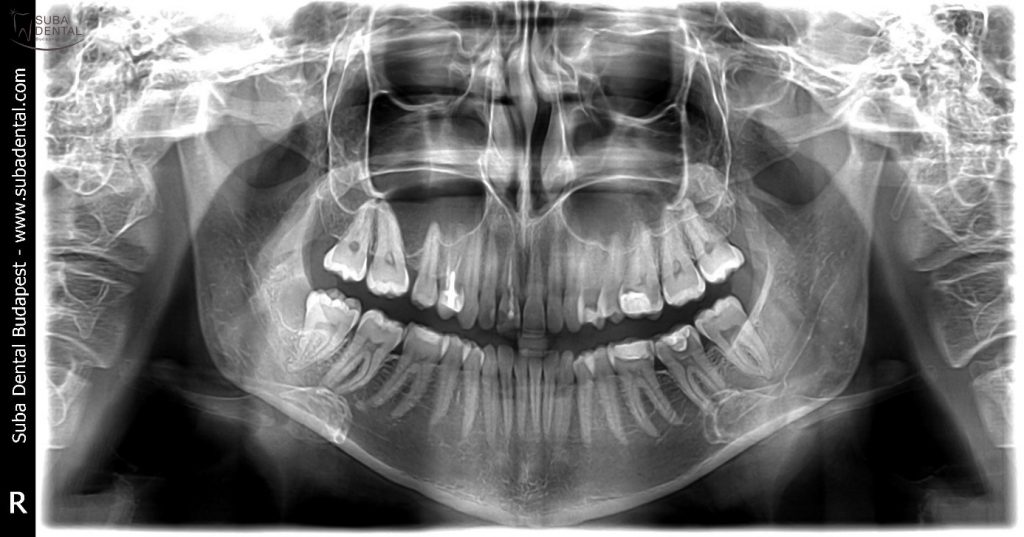 The prevention of the root resorption of neighbouring teeth

If a wisdom tooth exerts pressure on a neighbouring tooth, it may cause the resorption of the root thereof. 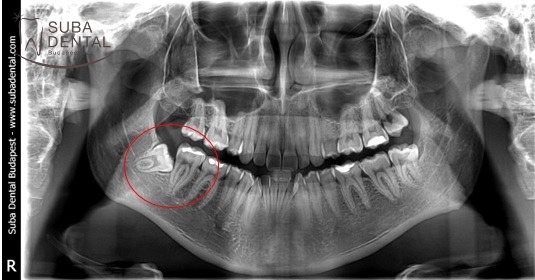 By virtue of its position, the lower right wisdom tooth exerts pressure on the root and neck of the neighbouring tooth

The removal of wisdom teeth due to orthodontic treatment 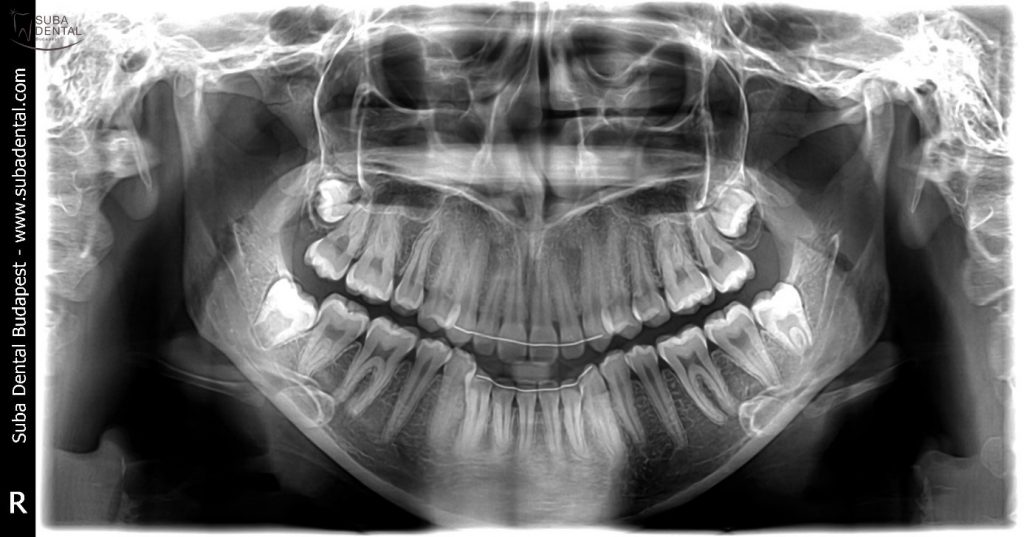 Following the orthodontic treatment a retainer (bright line in the X-ray image) is mounted, which is a wire cemented to the teeth from the lingual side, holding the front teeth in position. At the orthodontist’s request the removal of wisdom teeth may be indicated. The surgery is simple as the roots are not full-blown.

In case of facial pains of unknown origin

The diagnosis and treatment of facial pains is rather complicated. Impacted wisdom teeth at the affected area may, albeit rarely, be at the root of our complaints. Special attention needs to be paid to the upper wisdom teeth, which, based on clinical experience, cause such symptoms more often than the lower ones.

When is the removal of wisdom teeth contraindicated?

Removal of an unerupted teeth is contraindicated at an old age, unless giving complaints. With elderly people bone tissue loses some of its flexibility on account of increasing sclerosis. Removal of the tooth is increasingly more difficult and hazardous, especially in case of an edentulous jaw bone which is more at risk for fracture. At this age, wound healing is slower and post-operative complications are also likelier to arise.

The removal of wisdom teeth is furthermore contraindicated if there is a risk of surrounding anatomical entities being injured. Panoramic radiography and a personal dental examination of the oral cavity are prerequisites for setting up the appropriate diagnosis and drawing up the treatment plan. In the radiograph the position of the wisdom tooth and its relationship to its environment is readily discernible. If the tooth due for removal is situated at a difficult-to-access area or its removal would inevitably entail the injury of nervous entities or sound teeth, the pros and cons of removal have to be weighed thoroughly. Such instances call for a CT (CBCT – Cone beam computed tomography) scan allowing for the 3 dimensional examination of the exact position of the tooth and the path of the inferior alveolar nerve as well as the tooth adjacent to the wisdom tooth. 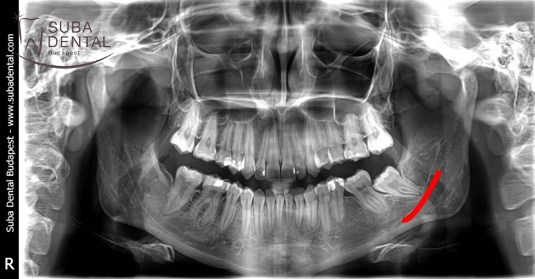 As evidenced by the panoramic radiograph, the root canal of the wisdom tooth runs close to the alveolar nerve. In such instances a CBCT scan is in order to examine the exact position of the tooth in 3 dimensions and to accurately measure its distance from the nerve

The removal of the wisdom tooth is a surgical intervention during which a lobe needs to be formed for exposure and bone needs to be drilled away to disengage the crammed tooth. In most cases the crown of the wisdom tooth has to be cut off (coronectomia) and the roots need to be separated from one another (dissection) for easier removal of the tooth, a task both the patient and dentist need to psyche up for – not least as regards surgical equipment. With heavily inflamed wisdom teeth, the dentist may at first prescribe antibiotics so that the inflammation decreases somewhat by the time of the surgery. The environment of a heavily inflamed tooth is difficult to anaesthetise, without which surgery is only possible in exceptional circumstances.