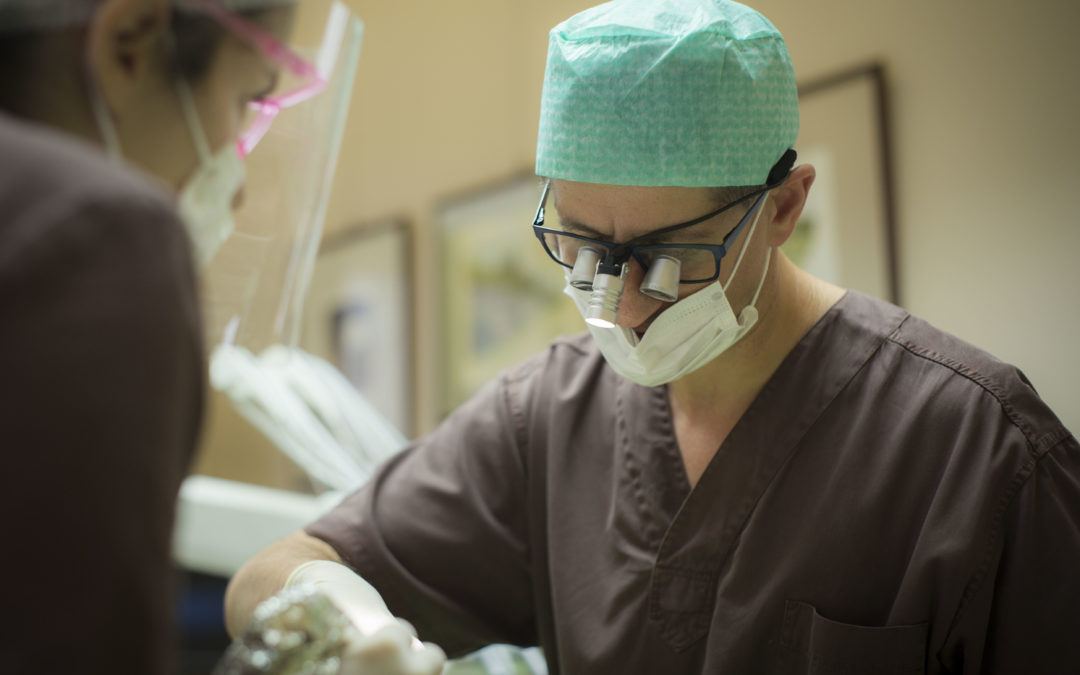 Our male patient, age of 52 presented to our clinic with the following requests:

At the first encounter a CBCT (Cone beam computed tomography) was performed for a 3 dimensional examination of residual bone mass prior to implant surgery. The CT scan demonstrated inadequate bone height in the site of the molars in the left quadrant, necessitating a bone graft called sinus lift. The site of a previous tooth extraction did not heal properly making surgical debridement necessary to remove the soft tissues (granulation tissue) having formed in the region. The implant previously inserted at the site of tooth number 17 at another clinic was in a state of disrepair, with a progressive extent of bone resorption and inflammation in the area, warranting the removal of the old implant (explant surgery).

The patient was apprised of his dental condition and the following treatments were performed:

At our patient’s request no provisional removable denture was provided for the healing period (6 months, the minimum healing time required after bone graft) as the patient had never worn provisional replacements of any kind before and neither did he intend to do so going forward. By his account, he could not relate to a provisional replacement as he was accustomed to edentulism and could perfectly do without teeth for a couple of months more. Furthermore he would not run the risk of the provisional denture affecting healing.

The treatments would be continued 6 months later with the finished crowns and implants installed in the upper right quadrant. 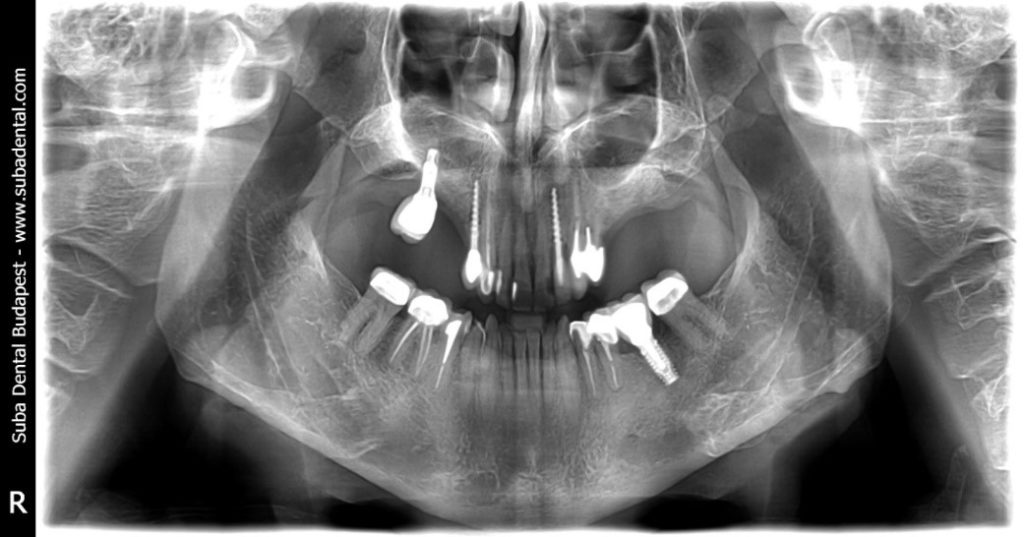 Panoramic radiograph of the initial condition 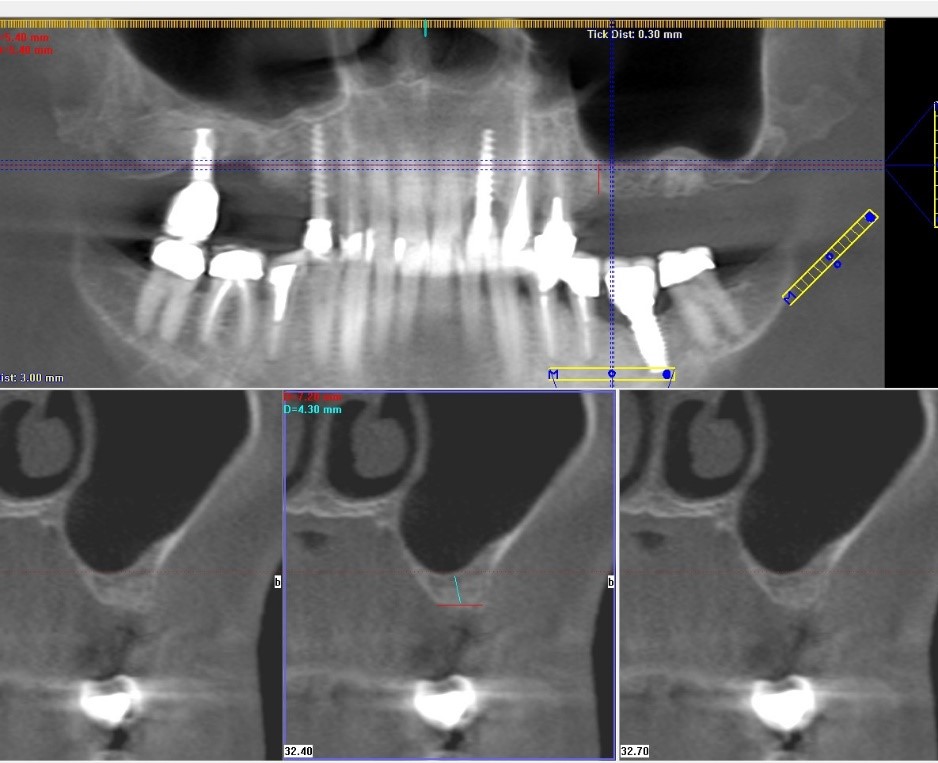 Implant-borne tooth replacements require as much, if not more care and follow-up as natural tooth-borne varieties. In the first year patients are advised to report for a short check-up twice and have a tartar removal performed. There is a very close relationship between tartar build-up and the long-term success of implants. Patients are advised to have a bite-check performed on a regular basis as a less than perfect fit may overload the denture and the ceramic may chip off on account of a traumatic occlusion or an inflammation may develop around the implants (periimplantitis). 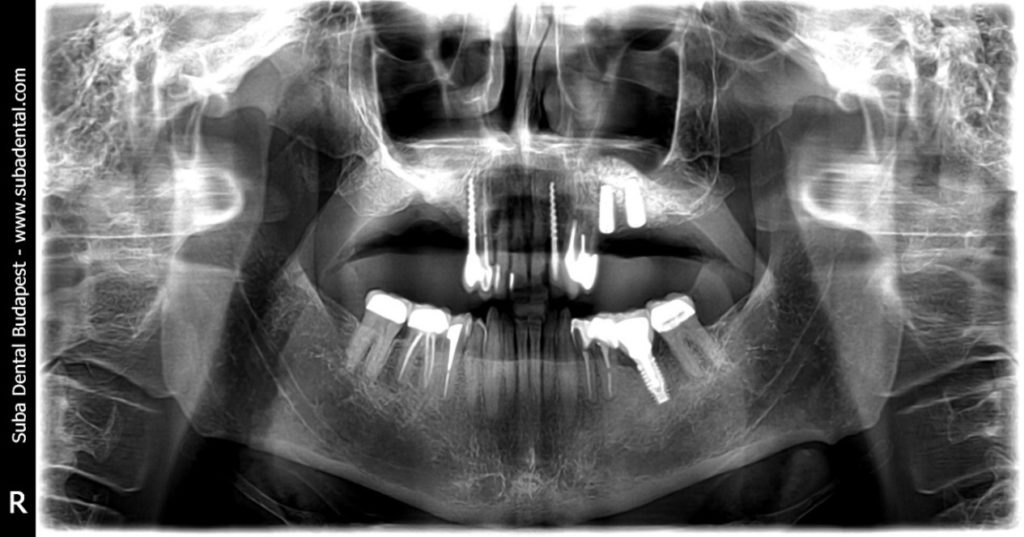 Follow-up panoramic radiograph of the treatments accomplished, the 2 upper left implants and the bone graft (sinus lift). On the right (to the viewer’s left) it can be seen that the old implant has been removed (explant surgery)